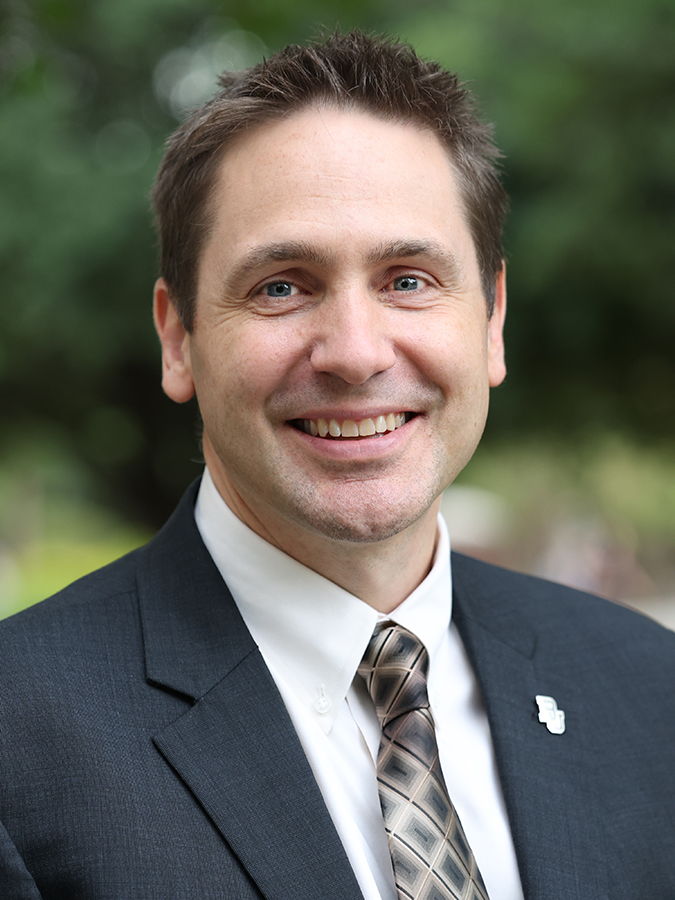 Jason R. Carter, PhD, was appointed Dean of the Robbins College of Health and Human Sciences in August 2022. In his role, Dean Carter oversees the newest college on the Baylor University campus, which offers undergraduate, graduate and doctoral programs in health and human sciences on-site and online, as well as through partnerships with the U.S. Military. Robbins College houses several academic units, including Communication Sciences and Disorders; Human Sciences and Design; Health, Human Performance and Recreation; Occupational Therapy; Physical Therapy; Public Health; and Division of Health Professions. While varied in their professional approaches, the programs in Robbins College share a common purpose of improving health, well-being and quality of life for individuals, families, communities and environments.

Prior to his appointment at Baylor, Dean Carter served as Vice President for Research, Economic Development and Graduate Education at Montana State University (MSU), where he oversaw the University’s research enterprise, including sponsored programs, research compliance, research development, technology transfer and graduate school, in addition to serving as a professor in MSU’s Department of Health and Human Development. At MSU, Carter had key administrative accomplishments of three consecutive years of record research expenditures, including $193 million in fiscal year 2021, which contributed to MSU maintaining its Carnegie R1 designation. Before his time at MSU, Dean Carter served for 14 years as a faculty member, department chair, associate dean and associate vice president for research development at his alma mater Michigan Technological University (BS summa cum laude and PhD in Biological Sciences). There, he was the lead administrator to champion a $30 million state appropriation for a new health sciences and engineering building and the development of a satellite doctoral physical therapy program in partnership with Central Michigan University.

Dean Carter is an active researcher focusing on neural control of the cardiovascular system in humans and the role of sleep in cardiovascular disease. He has been the principal investigator or co-PI on more than $74 million in external research awards. This includes two active NIH R01 grants, as well as a recently secured $63 million partnership to expand collaborative translational health research between the University of Washington and Montana State University.

Dean Carter has more than 100 peer-reviewed journal publications. He is past associate editor for the American Journal of Physiology – Regulatory, Integrative and Comparative Physiology; current associate editor for the American Journal of Physiology – Heart and Circulatory Physiology; and current standing member of the National Institutes of Health MESH study section. He also served on the Cardiovascular Risk Scientific Review Panel for NASA from 2012-2015. He served as president for both the American Kinesiology Association and Michigan Physiological Society and recently completed a three-year term on the Council of the American Physiological Society. Dean Carter recently served on the Executive Committees of the Association of Public and Land-grant Universities (APLU) Council on Research and the Federal Demonstration Partnership, both leading organizations aimed at advancing the U.S. research university enterprise. He has been honored with two national distinguished awards. He was elected Fellow of the National Academy of Kinesiology in 2017 and received the Jerry R. Thomas Distinguished Leadership Award from the American Kinesiology Association, the society’s top peer-reviewed award, in 2021.